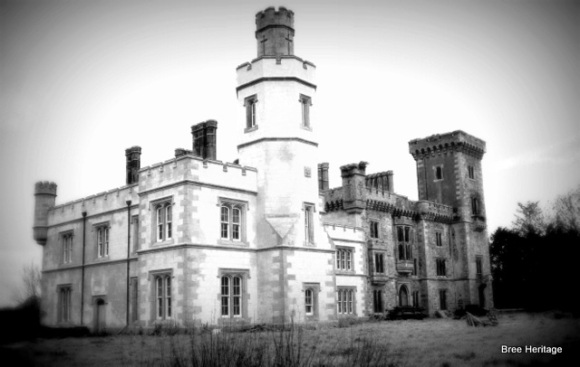 On the eve of Halloween it seems only fitting that we discuss the ghosts and spectres that are said to haunt the ruins of Wilton Castle. Wilton or Kayer, as it was formerly known, was first built by the De Dene familly, probably in the early 13th century. Over the proceeding years it was also to be the residence of the Furlong and Butler families before finally becoming the home of the Alcocks in the late 17th century. It was the Alcock family who constructed the now familar Neo-Gothic mansion, the ruined remains of which, still tower above the adjacent River Boro (the castle was burnt down during the troubles).

If the local legends are to be believed, a fair number of ghosts now lurk within the castle’s walls. One story recounts strange lights that are sometimes seen in the ruins of a castle tower where an old woman died in a fire. Another tale states that every year on the anniversary of his death, the shadow of Harry Alcock, who died in 1840, is seen driving slowly away from the castle in a ghostly carriage. Crowds once gathered in anticipation of the event, and a local shoemaker claimed to have spoken with the phantom.

The strangest tale, however, is that of  Archibald Jacob, who served as a local magistrate and also captained a loyalist militia company during the rebellion of 1798. Jacob had a notorious reputation and is thought to have flogged and tortured many people in the parish. While returning home one night from a ball at the castle he fell from his horse while crossing a stream and was killed. For years afterwards his ghost was said to haunt both the scene of his death and the castle. On one occasion, a Catholic priest was summoned to the castle to conduct an exorcism. When he made the sign of the cross, the ghost of Archibald Jacob allegedly appeared in the fireplace, then disappeared in a cloud of smoke.