This article details the tumultuous life of James Keating, a Bree man who played a starring role in the politics and history of late 15th century Ireland.

James was born in Ballybrennan, or as it was then known Kilcowanmore[i], and belonged to an important local family, the Keatings, who had been lords of Kilcowanmore since at least 1247 AD[ii]. At an early age James was enrolled in the Knights of St. John Jerusalem, a military religious order who were also known as the Knights Hospitallers. The Knights origins lay in the holy land where they protected pilgrims and fought the Saracens (Muslims). In Ireland they were entrusted with defending the Anglo-Norman colony from attack by the native Irish. One of their main Irish preceptories (monasteries) was located in Bree at Ballyhogue and it is likely this is where James Keating began his religious education. Indeed, the Keating family had a strong affiliation with the Knights Hopitallers as in the early 13th century they had donated churches at Slieve Coillte, Horeswood and Ballybrennan, Bree to the order[iii].

On returning to Ireland James moved into the Knight’s Hospitaller’s main Priory at Kilmainham, Dublin. He was there only a short time, however, when he became embroiled in controversy. On the feast of Pentecost, 1462, he confronted the Deputy Chief Treasurer, James Dowdall, near Kilmainham. In the ensuing dispute Prior Keating drew his sword and Dowdall fled, fearing for his life[vi]. Keating was subsequently arrested but all charges were dropped, apparently after the intercession of The Earl of Kildare. This great magnate was a close ally of Prior Keating, and in turn these two men were noted supporters of the House of York in England, who at that moment in time were fighting a bloody war  with the House of Lancashire.  In essence a civil war, this dispute over the English crown had been on-going since 1455 and would not be resolved until 1485. The conflict dominated Irish politics and Prior Keating’s career was to fluctuate according to which house, York or Lancashire, was in the ascendant.

Under the patronage of the Earl of Kildare James Keating ran the Knights Order relatively successfully for the next few years. The Irish priory paid its responsion(annual monetary dues) to Rhodes in full and on time each year and Keating’s relationship with the Hospitaller’s Grand Master appears to have been cordial.  However, things were to change utterly in 1467 when James was called to Rome to attend a general chapter of the Knights of Hospitallers. The chapter dramatically increased the annual Irish responsion from £40 to £90[vii]. James was obviously put out about this and he complained bitterly that it was a crippling amount to pay. It appears he left this chapter disillusioned with his continental counterparts and his relationship with the Hopitaller leadership became increasingly strained.

On arriving back in Ireland things went from bad to worse for Prior Keating. The king had appointed an Englishman Sir John Tiptoft, the Earl of Worcester, as the new Lord Lieutenant of Ireland[viii]. Tiptoft was under orders to curb the influence of Keating’s two great patrons, the Houses of Kildare and Desmond, who were believed to have been become overtly Irish in their customs. The new Lord Lieutenant organised a parliament at Drogheda, before which, the two great magnates were attainted. Found guilty of treason they were condemned to death and imprisoned. Although the Earl of Kildare managed to escape, Desmond was not as fortunate and on February the 15th 1468 he was beheaded.  Tiptoft did not trust James Keating either, as he was a noted Kildare supporter and the prior was also imprisoned, only being released after a massive fine of £40 pounds was paid.

But as was wont in these turbulent days James Keating’s fortunes were about to change.  In England the tide of war once more turned in House of York’s favour when they won two decisive battles at Barnet and Tewkesbury in 1471. The English order of the Knight’s Hospitallers, who had been at logger heads with Prior Keating for some time, had fought on the losing Lancaster side in both these battles. As a result the English Head Prior, Brother Langstrother, was executed for treason. This change in the English political situation dramatically altered James Keating position in Ireland. The House of York were once more in control and as a result their Irish ally, Prior Keating, was again in the King’s favour.

However, after a relatively quiet few years things started to hot up again for Prior Keating in 1478 when his ally the Earl of Kildare rather rashly assumed the position of Lord Deputy of Ireland without King Edward IV’s prior approval. Unimpressed the king appointed Lord Grey of Ruthin as the new Deputy to Ireland. He arrived in Dublin in October of 1478 with a force of over 300 archers to enforce his writ[ix]. However, obstinate as ever, Prior Keating was unwilling to recognise the new Deputy, especially as it threatened the position of his ally Gerald of Kildare. When Lord Grey tried to gain access to Dublin castle, where James Keating was then constable, the belligerent Prior refused him entry. He even went as far as to destroy the drawbridge across the castle’s moat, to ensure the fortification couldn’t be taken by force[x]. Although undoubtedly enraged, Grey showed great restraint and instead of attacking the castle he sent word to the King.  A meeting was subsequently arranged in London and was attended by Prior Keating and the Earl of Kildare. Metaphorical bridges were mended and Gerald of Kildare was restored as Lord Deputy, while James Keating was allowed to remain as the constable of Dublin castle. 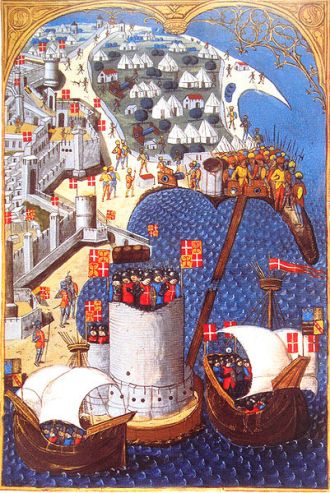 While Prior Keating was preoccupied with Irish affairs things were becoming precarious for the Knight’s Hospitallers in Rhodes. On 23 May 1480 an Ottoman fleet of 160 ships appeared before the city, along with an army of 70,000 men. For the next three months a bloody and violent siege ensued, with large casualties on both sides. Finally the Knights Hospitallers managed to repulse the Turkish attacks and on August 17 the Ottoman army left defeated. Fearing another attack was imminent and seeing that his army was severely depleted the Grand Master requested reinforcements from all over Europe. Ireland was not forgotten in his plea and Prior Keating was ordered to Rhodes to defend the city.

Keating had no interest in undertaking such an arduous journey and he pointedly refused to go. After waiting for over a year and half the Grand Master finally lost patience with the Ballybrennan man and took drastic action. In 1482 Keating was deprived of his position and an English Knight, Brother Marmaduke Lumley, was chosen instead as the new Head Prior in Ireland, a move that was subsequently approved by Pope Sixtus IV[xi]. However, James Keating was not the kind of man who went quietly into the night.

When Marmaduke Lumley landed near Clontarf, Co. Dublin he was met by a large force of men under the command of James Keating. The Wexford native had no intention of relinquishing his position without a fight and he immediately arrested Lumley and took all his patents of confirmation[xii]. News of this outrage reached the Papal Legate in Ireland, de Palatio and also the Archbishop of Dublin, John Watton, both of whom formally excommunicated Keating[xiii]. This didn’t perturb James in the slightest and he continued to ignore the Grand Master’s orders to stand down. In 1484 an exasperated de Palatio led a large force of soldiers to Marmaduke Lumley’s defence[xiv]. Undeterred Keating and his men confronted the Papal Legate’s expedition and repulsed it.  The unfortunate Lumely was to die a short time afterwards in Keating’s prison[xv]. For the moment at least Prior Keating’s fortunes were on the rise.

However, as was often the case in James Keating’s life, circumstances elsewhere were about to impact on his career. In 1485 at the Battle of Bosworth Field in England Henry Tudor defeated King Richard III. This marked the final battle of the English Civil war and disastrously for James Keating it saw the House of York finally defeated. In the confusion and turmoil that followed a remarkable deception unfolded. A young boy named Lambert Simnel was put forward by an Oxford-trained priest, Richard Simon, as the true heir to the English crown. These claims were in fact false and Lambert was actually of boy of lowly birth that had been specially educated and trained by Simons who apparently desired to become a kingmaker.  Knowing that support for the Yorkist cause was still strong in Ireland Richard Simon brought his young protégé to Dublin.

Prior Keating enthusiastically supported Simnel[xvi] and used his considerable influence to convince the Irish lords of the young pretenders cause. His lobbying proved successful and on 24 May 1487, Simnel was crowned ‘King Edward VI’ in Christchurch Cathedral, Dublin. The Earl of Kildare then collected an army of Irish soldiers under the command of Thomas Geraldine, who were aided by a force of c. 2,000 Flemish troops under the command of Martin Schwartz. This army set sail for England with high hopes of retaking the crown but on the 6th of June 1487 they were crushingly defeated by Henry VII at the Battle of Stoke Field. This battle marked the end of James Keating’s career. Fortunate not to face execution for treason the Ballybrennan man was removed from his position as Head Prior of the Knights Hospitallers. He subsequently disappeared into obscurity and ‘ended his turbulent life in abject poverty and disgrace’[xvii].

[iv] Byrne, N. 2007. The Irish Crusade. A History of the Knights Hospitaller, Knights Templar, and the Knights of Malta, in the South-East of Ireland. Liden Publishing, Dublin. P. 331

[ix] Byrne, N. 2007. The Irish Crusade. A History of the Knights Templar, and the Knights of Malta, in the South-East of Ireland. Liden Publishing, Dublin. p. 340

[x] Darcy MacGee, T. (2008) A popular History of Ireland from the Earliest Period to the Emancipation of Catholics. Forgotten Books. p. 248

[xi] Byrne, N. 2007. The Irish Crusade. A History of the Knights Hospitaller, Knights Templar, and the Knights of Malta, in the South-East of Ireland. Liden Publishing, Dublin. p. 341

[xiii] Byrne, N. 2007. The Irish Crusade. A History of the Knights Hospitaller, Knights Templar, and the Knights of Malta, in the South-East of Ireland. Liden Publishing, Dublin. p. 342

[xvii] Darcy MacGee, T. (2008) A popular History of Ireland from the Earliest Period to the Emancipation of Catholics. Forgotten Books. p. 248