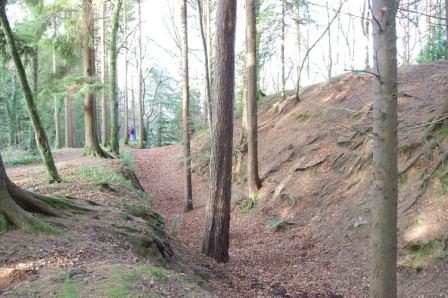 One of the most striking archaeological sites in Bree is located at Borrodale in Dunanore townland. This well known local beauty spot overlooks the River Boro and is a favourite location for walkers and anglers alike. It also contains the remains of a large and imposing fortification, which is located immediately to the northeast of the public carpark. This impressive fort was visited and recorded by members of the Bree Heritage group on the 18th of December 2011 (Thanks to all those involved). It is defined by a massive earthen bank and ditch to the east, south and west and by a sheer cliff face to the north. Indeed, this monument probably gives the townland its name, Dunanore most likely translates as the ‘fort (dun) on the brink/cliff edge (ochair)’ (*see the bottom of the post for an alternate meaning).

It appears to have been built by the Anglo-Normans and it is described as a ringwork castle in the Archaeological Inventory of Co. Wexford (Moore 1996). Ringwork castles were erected in the first 50 years or so of the Anglo-Norman colony (AD 1169-1220) when they were used as bases to defend lands recently captured from the native Irish. They are related tomotte and bailey castles but lack the high mounds of earth which are normally associated with mottes. Ringworks were typically constructed in place of stones castles, which were prohibitively expensive and more importantly took too long to build in insecure areas that were prone to lightening attacks from the Irish. Instead, ringwork castles were defended by deep ditches and large enclosing banks of earth which could be erected much more swiftly than stone walls.

Although ringwork castles, as their name suggests, are often circular in plan some were also built on natural promontories, which could be easily defended by erecting banks along their landward approaches. Dunanore is an example of the latter with its northern side being defined by sheer cliffs that rise 20m above the River Boro below. The remainder of the site is defended by a curving ditch and double bank. The ditch is largely silted up but it still survives to between 4m and 7m in width, while the substantial inner rampart rises to over 5m in height (above the base of the ditch). For added defence a second smaller bank, measuring a maximum of 9.5m wide by 1.9m high, is located immediately outside of the ditch. The fort is accessed via an earthen ramp, which leads across the ditch and through a narrow, 2m wide, gap in the inner bank. It is likely that this south facing entrance was originally sealed by a large timber gate and protected by a wooden guard tower. Similarly the inner bank would have been surmounted by a stout palisade (fence) of wooden posts, which would have formed a formidable defensive wall.

The interior of the fort measures approximately 38m north-south by 34.5m east-west and it is considerably higher than the surrounding fields (the site appears to have been built on an natural knoll). It contains a number of earthworks that probably represent demolished buildings. There at least two rectangular structures, the first immediately inside the gate and the second adjacent the eastern bank. The structure beside the gateway survives as sunken rectangular area partially defined by a wall of mud bonded stones (one to two courses high). It measures approximately 6m long by 4.5m wide and originally it may have consisted of a stone walled cottage, possibly roofed in thatch or wooden shingles. The second rectangular building is in a poor state of preservation and is defined by a series of low earthen banks which enclose and area measuring roughly 12m long by 5m wide. There are also a number of other humps and hollows within the interior of the monument which may represent the much degraded remains of buildings.

Dunanore may represent the original caput (base) of the De Dene family, who were granted large tracts of land in the modern day parishes of Bree, Davidstown and Glynn during the early 13th century. They were later to be based at Wilton which is just a short distance upsteam along the Boro River and they may have moved to this less defensive but more accessible site when the threat of attack from the Irish receded. Although the exact origins of Dunanore remain uncertain the construction of a nearly identical ringwork castle at Ferrycarrig, Co. Wexford is much better documented. This promontory fort was erected by Robert FitzStepehen in 1169 and was one of the very first Anglo-Norman fortifications built in Ireland. The fort is located on a high bluff which overlooks the River Slaney and is notable for the presence of large replica round tower within its interior (the round tower was built to commemorate those who died in the 19th century Crimean war). As at Dunanore the fort is protected by very high and steep cliffs to the east, north and south, while a deep ditch and bank cut of the peninsula to the west. Archaeological excavations carried out by Claire Cotter and Isabel Bennett revealed that the ditch defending the site measured up to 2m deep while the bank was 1.8m high. Evidence for a large 13th century stone building and possible wooden structures were also identified within the interior as well as a metal-working area (Excavation bulletin, Excavation bulletin 2).

This site is probably best known for an extended siege that took place here in 1171 when a small group of Anglo-Norman knights and archers, under the leadership of Robert FitzStephen, held out against a large force of Irish warriors. Unable to capture the fort by force the Irish turned to subterfuge. They sent forth two bishops to the edge of the defensive ditch who swore on a series of sacred relics that Dublin had fallen and that all the English in Ireland had been slain. They declared that a huge army of Connacht and Leinster men was now heading southward to Wexford and the only chance the defenders at Ferrycarrig had was to surrender now. If they did so they would be allowed safe passage back to Wales. Seeing no other option and believing the deceit, FitzStephen and his men surrendered the fort. They were immediately imprisoned, a number were slain and FitzStephen himself was sent to the island of Bergerin under guard.
Although we know little about the history of Dunanore or if it was ever attacked the siege of Ferrycarrig does show that its impressive fortifications were very necessary in the turbulent days of the late 12th and the early 13th centuries AD.

*It is also possible that Dunanore means ‘fort (dun) of the gold (oir)’. This may be the orgin of a number of local folklore tales which tell of treasure or gold that is supposedly hidden in a deep pool in the River Boro directly below the fort. This pool is known as the soldier’s hole and various tales tell of how the treasure at the bottom of the pool is guarded by a soldier or dragon or giant eel.