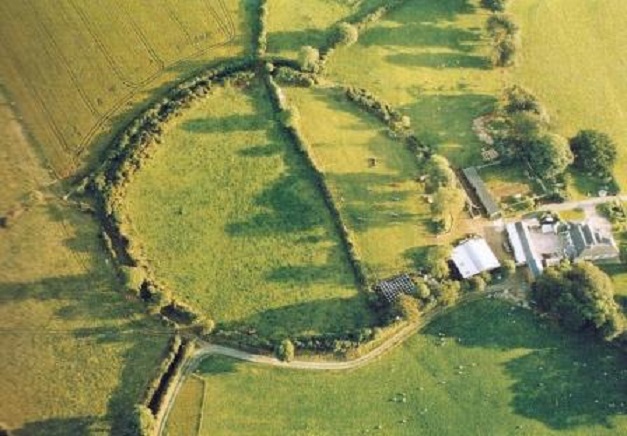 One of the largest and oldest archaeological sites in the parish of Bree is the imposing hill-fort at Ballybuckley (RMP WX025-034). This impressive monument is situated on a low hill, c. 84m high, that affords it clear views of the Slaney valley to the east and southeast. Despite its prominent location the hill-fort is not overly exposed as it lies in the lee of Bree Hill which affords it some protection from the prevailing southwesterly winds. It may be significant that the site is situated beside the barony boundary between Bantry and Shelmalier West, as this may demark an ancient tribal division.

It is one of only two hill-forts located within county Wexford;  the other is  located at Courthoyle, Adamstown. The Ballybuckley hill-fort measures c. 130m in diameter and is defined by an large earthen bank which survives to between 9m-11m in width and up to 2.2m in height. The interior of the monument is divided by a relatively modern field boundary and there are three entrances, all of which appear to be recent in date. However, an unusual series of field boundaries located on the southwest side of the monument may indicate where the original entrance was located. These field boundaries appear to define an avenue feature that may have been focused on the original gateway (see image below).

The original function of hill-forts has been much debated. It is possible that some were built as defended settlements, or as intermittently occupied refuge places, while others may have acted as ceremonial gathering places. Only a very small number of the approximately 70-80 hill-forts in the country have been excavated thus far.  The results of these excavations suggest that  they were primarily built in the Late Bronze Age (c. 1200-600 BC) and that some at least were the homes of important tribal chiefs.

At Rathgall, in Co Wicklow a large hill-fort defined by four concentric banks contained extensive evidence for human occupation. The fort was located on a relatively low rise, approximately 137m in height that had clear view of the surrounding countryside. Near the centre of the monument a small excavation revealed the presence of a very large circular house that measured c. 15m in diameter. It was defined by curving foundation trench, which would have supported walls that were probably made out of wattle panels supported by wooden posts. The entrance into the building faced eastwards and internally it contained a large number of stakes and postholes that probably defined internal divisions as well as supporting the roof. Numerous artefacts were recovered in and around the house including pottery, bronze objects, and stone and glass beads. The excavations also revealed a number of other smaller buildings on the hill top as well as cremation burials and an extensive workshop area. The later was associated with metalworking as metal working debris was recovered along with clay moulds for making bronze weapons. This site dated from the Late Bronze Age and was obviously a high status settlement, which may have been the home of a tribal lord.

Similarly at Haughey’s fort, Co. Armagh extensive evidence for settlement activity was uncovered. Archaeological excavations at the site revealed that it was defended by a deep ditch c. 2.8m deep that enclosed an area 150m in diameter (aerial photos also suggested two outer enclosures). The interior contained a large numbers of pits, probably for disposing rubbish, as well as postholes which may have defined enclosures and buildings. Artefacts recovered from the site included Bronze Age pottery, tiny fragments of gold ornaments, carbonised seeds and burnt and un-burnt animal bone. The animal bone indicated that the inhabitants reared cattle and pig as well as dogs and sheep and hunted wild species such as red deer, boar and fox (Lynn 2003, 67).  Haughey’s fort appears to have been a focal point for settlement in the area and as at Rathgall, it may have been the home of a tribal chief (although a ritual function for the site can’t be ruled out).

Other hill-forts where huts sites have been identified include Knocknashee, Co. Sligo, Freestone Hill, Co. Kilkenny, and Mooghaun, Co. Clare.  As these sites demonstrate Ballybuckley hill-fort has the potential to contain extensive evidence of human occupation within its substantial ramparts. It is likely that Ballybuckley was the focal point for tribal activities and may have been the home of an important Bronze Age lord.Indeed it is not hard to imagine a large, well defended village existing on this prominent position overlooking the Slaney valley nearly 3000 thousand years ago.

Raftery, B. 1994. Pagan Celtic Ireland: the enigma of the Irish Iron Age. Dublin.