On the 8th of April 1580 the parish of Bree was attacked by a large force of men who robbed and pillaged as they went. This event and more importantly the subsequent English response was to set the province of Leinster aflame. It saw the Gaelic Irish rise up in open rebellion and the English held lands attacked and burned. A large Royal army was assembled to counter this threat only to be annihilated at the battle of Glenmalure. Suddenly, it seemed as if the very existence of the English lordship in Ireland may be in danger.

So what exactly happened in Bree on that fateful day in 1580? According to Thomas Masterson, the then Seneschal of Wexford, a large group of armed men belonging to the Art Boy Kavanagh clan entered the parish (Hore 1911, 69). However, this was not a social visit. These men, under the leadership of Donal Spainneach, were intent on stealing as much as they could. It appears that they arrived into the parish from the west as one large group. They then split up into smaller bands so they could hit a number of locations at once.

Firstly Maurice McBrien along with 48 men attacked Rahenegowne  (Raheenahoon) and broke open the doors of the houses and smashed the wooden storage chests within. They then proceeded to steal 2 barrels of ‘drinke’, 5 quarts of whiskey, 3 pigs, 2 sheep and 6 lambs as well as bags of grain. The inhabitants of these dwellings included Maurice Mor McThomas, as well as other tenants of Maurice Fitzhenry of Macmine Castle. Next to be attacked, moving eastwards, was Killery (Killray), a townland once located between Knockduff and Macmine, but now no longer extant (It is recorded in the Civil Survey of 1652). Here a band led by Art Boy Beag McArte ‘did robbe and extort with force of arms’ the inhabitants of the locality including Dermot O’Reilly, Padden More and Shane Ballagh (all tenanats of Mathew Fitzhenry). They stole 2 barrels of drink, 6 sheep, 3 lambs and 3 good mantles (cloaks).

Meanwhile a company of 40 men under the leadership of Cahir McCahire and Morragh McHowryre attacked Ballykoeke (Ballyhogue), where they proceeded to rob Nicholas Fitzhenry. The goods taken included pigs and sheep as wells as stores of ‘malte, beans and barle’. Finally Donal Spainneach accompanied by Cahire Verraghe and 60 men raided Kereghte (Kereight). Here they stole 5 pigs, 4 sheep, 8 lambs and 2 barrels of drink belonging to David More, Dermot Hurley and others (all tenants of Maurice FitzHenry). It is likely that the divergent bands of Kavanaghs then regrouped for the night to count their spoils. It had been a productive days raiding. In total they had stolen 11 pigs, 12 sheep, 20 lambs, 9 barrels of beer, 5 quarts of whiskey, 3 cloaks as well as large quantities of barley, malt and beans.

However, their luck was to run out two days later when The Seneschal, Thomas Masterson, and a large force of soldiers managed to surround their encampment. He ordered them to surrender, which they did. However, Masterson went back on his word and massacred up 60 of the detainees. In the confusion that followed their leader, Donal Spainneach, managed to escape and fled to the Earl of Ormonde (Thomas Butler). (the Art Boy Kavanaghs had officially been under the Earl’s protection). Indeed, Donal’s escape may have been aided by the Earl’s first cousin, Pierce Butler, who was then resident at Wilton Castle (Kayer).

The Earl of Ormonde, who was one of the most powerful men in the country, was incensed by Masterson’s treachery and demanded the government censure him. His demands, however, were to fall on deaf ears. Even more enraged was Feagh McHugh O’Byrne, the great Gaelic warlord, who was a long time adversary of Masterson. The Art Boy Kavanagh’s were his kin and he demanded Masterson’s head in revenge. Feagh quickly set about organising the Gaelic clans and in June a large horse-borne confederation swept through Wexford laying waste to Masterson’s lands (see Byrne). The Seneschal managed to escape but these raids caused great unease in Dublin. 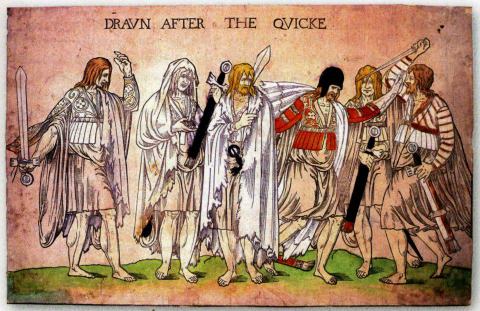 An anonymous woodcut of Irish warriors, ‘DRAVN AFTER THE QVICKE’ (from life), dated to the reign of Henry VIII (now held in the Victoria and Albert Museum)

Feagh then allied with the Anglo-Norman Viscount of Baltinglass, a fervent Catholic, who was opposed to the Protestant dominated administration. Suddenly, the Dublin government was faced with a large rebellion right on its doorstep. It was a situation that could not be allowed to persist and a large army under the command of Lord Arthur Grey de Wilton was assembled. At the end of August they set forth to destroy the forces of Feagh McHugh and Baltinglass. They were led on a merry chase through the Wicklow hills and mountains until they finally arrived at Glenmalure, the very heart of Feagh’s territory. As the English soldiers entered this heavily wooded valley they were not to know that many of them would never leave its confines.

The ensuing battle proved a disaster for the English army. They were cut down in their hundreds by a well trained Irish force who expertly exploited the natural terrain to their advantage. A bloody retreat ensued and estimates suggest that up to a 1000 English soldiers may have perished (see Byrne). Thus what started out as a relatively minor attack on the parish Bree in April 1580 was to end, just 5 months later, in one of the worst defeats suffered by a royal army in Ireland. As Thomas Monson once said, the gate of history turns on small hinges.